I read an interview with baseball stats guru Bill James in which he said something like this: we know a lot about how to optimize the play for a single team. But we don’t know how to optimize a league. For one team, the goal is simple: win the championship. Anyone good with stats, optimization, and machine learning, if given enough data, can help you solve that problem. But what about an entire sport? Suppose you want to optimize Major League Baseball? What do you optimize? Do you want every single game to be a 50/50 toss-up? Probably not. Do you want one or two teams to dominate season after season? Probably not. Should you try to maximize revenue? Happy owners? Happy fans? Happy wealthy fans? Happy advertisers? It’s easy to see how any of these might have nasty consequences if sufficiently amplified.

In general it’s easier to describe specific undesirable outcomes than universal desirable ones.

In an age of machine intelligence, this becomes increasingly important. Machines and data can help you achieve marvelous things, but only if you have a clearly defined goal, a test to tell you if any given outcome is better than another. This puzzle is the idea behind Nick Bostrom’s Paperclip Syndrome. If you give a sufficiently powerful artificial intelligence the goal of making paperclips, it will chew through the galaxy grinding matter into paperclips, humanity be damned. Bostrom’s scenario sounds silly, but the idea behind it is serious. If you have the power to optimize the human condition, what are you optimizing for? Okay, so we’re not going to make paperclips. But we’re going to make something. What? 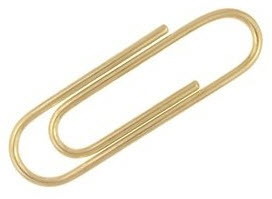 I recently listened to a Long Now talk by Brian Christian. The topic was Algorithms to Live By. It’s really good. It does a good job addressing the increasingly fraught intersection (or collision) of computer science and the real world. One gets the sense that computer science isn’t ready for it and neither is the real world. Christian takes on several topics, but the most profound one was related to Bill James’s question about baseball: At the highest levels in life, what is the objective function of the Good? It’s clear the answer isn’t to maximize quarterly profits for big corporations. But that’s the world we’re busy building, because we know how.

We’re amazingly good at answering questions. But we’re not so good at coming up with good questions.

Here’s a picture of a famous handshake from May of 2008. 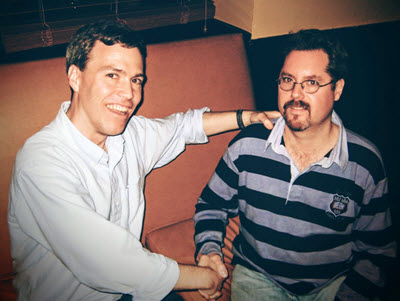 Okay, I’ll confess right away that it’s not really a very famous handshake, but it does signify and commemorate the moment when I told my friend Alan Kennedy (that’s him on the right) that I would host his nascent color project on my website. As beers were involved, I may have said something irresponsible like “You’ll be famous!”

But in that Andy Warhol/internet sense, Alan’s Color Project has become well known. I don’t know of anything like it. Launched it in October of 2008, it displays color-related idioms in many languages. Over the years its has come to contain more than 1500 idioms in 44 different languages. Está tudo azul! De toekomst ziet er rooskleurig uit!

One of the keys to its success is the fact that everyone who reads it is encouraged to contribute to it, whether by adding a new item or fixing an existing one. Add one yourself!

Now I am (ahem) tickled pink to announce that Alan has a new home for the project. He’s taking over the administration of the site on a WordPress blog here: Alan S. Kennedy’s Color/Language Project. You can reaquaint yourself with his Linguistic Facts About Color or jump straight to the great list itself.

Over to you Alan. It’s been an honor.