When you see a close-up photograph, something about it just looks small. Psychologically, what you’re responding to is the severely limited depth of field. Only one band of the photo is in sharp focus, and the foreground and background are both blurry. This happens because the physics blah blah optics blah blah blah.

But once you understand what signals your brain is responding to, the effect is easily faked in photos of much larger scenes. This technique is sometimes called tilt-shift because of how you need to modify the camera optics (blah blah Scheimpflug principle), and the result conveys an uncanny, and misplaced, sense of smallness. For instance, look at this. The picture on the left is genuinely small, a model. The picture on the right is an actual auto show being spoofed as a tiny one.

Once you’ve worked this magic on still photos, you can extend it to videos. You need to monkey around with the timing a little, but the effect can be spectacular. Here’s a video I came across on Ze Frank’s blog.

If you liked that, here’s one from Australia with some lovely music and an actual narrative arc: Bathtub IV.

The amount of useful stuff we squeeze out of petroleum is shockingly long. In addition to merely propelling us in various motor vehicles, it takes the form of plastics, lubricants, solvents, waxes, asphalt, synthetic rubber and fibers, flavorings and fragrances, cosmetics, medicine precursors, and on and on. On the plus side, we can be congratulated for eating every last knuckle and sinew of that oleaginous beast. More dispiriting is fact is that, as we consider the already frightening task of getting our fuel from somewhere else, we’ll need to get all those other things from somewhere else too. Where, for example, are we going to get all the plastic we need to hold this place together?

With that in mind, here’s a mildly cheering tale from Rob Carlson’s synthesis blog: Micro-Brewing the Bioeconomy: Beer as an Example of Distributed Biological Manufacturing. His premise is that small-batch biosynthesis of things like plastic precursors is already economically viable. This will supply carbon neutral versions of some of the chemicals we crave, but more importantly it will help us grow the expertise and infrastructure we’ll need farther down the road. To make his point, he considers the beer industry. If it was all about scale, he observes, then we’d all be drinking Budweiser, full stop. But there’s plenty of room for craft brewers. By analogy, there’ll be plenty of room for micro-brewery style biosynthesis startups. Carlson’s best line:

Any technology that is based on cow digestion doesn’t have to be any bigger than a cow.

Microbreweries won’t replace Exxon, not by a long shot. But they’re a critical step in the right direction. I was skeptical too, but Carlson pointed out that companies like Blue Marble Energy are already making money with this approach. Their game is turning algal slime into plastics. Watch the video on their home page.

Heard at the brew-pub of the future: Hey barkeep, how about an amide hefeweizen for the lady, and put another head on this carbon-neutral anhydrous ammonia double bock.

This impressive meta-film is the work of the comedy duo BriTANicK.

Meta is in the air these days.

People are getting more and more sophisticated with their media diet. In a world where every episode of Lost is picked over by an army of obsessive fans, and TV Tropes is right around the virtual corner, writers can’t rely on cliché as easily as they used to. But since true originality is as hard to come by as ever, the thing to do is use the cliché and wink while you do it. I know that you know what I’m doing and I’m doing it anyway ha ha. A good example of this is the Scary Movie franchise, the premise of which is to loudly abuse every gimmick in the horror movie book of tricks.

Here’s another example of parody-by-dissection that I came across in the Boston Globe: How to write an incendiary blog post:

This sentence contains the thesis of the blog post, a trite and obvious statement cast as a dazzling and controversial insight.

It’s only fitting to finish with a touch of Python (or Eric Idle anyway). From the musical Spamalot, we have The Song that Goes Like This.

Once in every show
There comes a song like this
It starts off soft and low
And ends up with a kiss
Oh where is the song
That goes like this?

The real question is, in a jaded postmodern world, what comes after meta? More meta or less? How many layers can you add before the parody doubles back on itself, before camp masquerading as sophistication is revealed as naked camp?

The irony bubble may be the next big bust.

Ever wonder, as you’re watching the Pasadena Tournament of Roses parade, or some equally bizarre weirdness-on-wheels spectacle, just who first came up with the idea for floats? If you’re a regular at the Atlas Obscura, you would know that they’ve been building floats for the Yamaboko festival in Kyoto ever since the year 869. That’s more than 2010 minus 870 years ago! 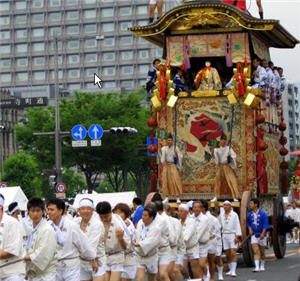 The Atlas Obscura, which bills itself as a compendium of the world’s wonders, curiosities and esoterica, is the sort of place you go to learn about the mud volcanoes of Azerbaijan and the firefly squid of Toyama Bay. But in addition to the remote and unearthly, you might find something quirky and much closer to home. As luck would have it, Obscura Day is coming up on March 20th. Look at the list and you might find something obscure near you. If, for instance, you live near Elkin, North Carolina, you should consider a visit to the Private Cabinet of Curiosities maintained by sister-in-law Anne. As they say in the Michelin Guide, it’s “worth a detour.”

Ask to see Frederick, the stuffed hamster. And tell ’em Ned sent you.

I wrote a short guest post for Loren Shure’s Art of MATLAB blog over at MATLAB Central. It’s based on a surprisingly visual explanation of a remarkable theorem. 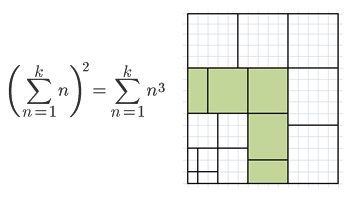 Have a look: Nicomachus’s Theorem.

“The larger the island of knowledge, the longer the shoreline of wonder.” -Ralph W. Sockman.

Magic is a slippery word. Does it refer to a trick or a glimpse of something deeper? This simple question has always puzzled me. This little essay is my attempt to nail down why that is. I want to talk about what we mean when we say magic.

But first let me tell a story.

END_OF_DOCUMENT_TOKEN_TO_BE_REPLACED

Pakistan and India share a border that is well over 1000 miles long, but in all that distance, there is only one road that goes directly across the border. Or at least that’s what is claimed by the Wikipedia entry for Wagah, a town that straddles the Grand Trunk Road between Amritsar (India) and Lahore (Pakistan) in the restless Punjab. A little poking around with Google Earth reveals that you can cross the border a few other places (like the Kasur Gate), but it’s absolutely incredible how few opportunities there are given the length of the frontier.

All this focuses great attention on the Wagah nightly border-closing ceremony. Military ceremonies have always been about theater, and the intense mixture of chauvinism and bitterness in the Punjab have ratcheted the cold war anxiety up to such stratospheric levels that the resulting theater would be laughable if the stakes weren’t so high. My dad recently sent me a link to this video of the border-closing ceremony. I find it simultaneously stirring and hilarious.

Here’s another good (slightly longer) video of the same ceremony. I watch this and I keep reminding myself that farcical military silly-walks theater is better than war. In fact, this video was produced by someone who knows a thing or two about silly walks: former Python troupe member Michael Palin.

And one more thing. I can’t shake the feeling that I’ve seen this kind of preening and strutting somewhere else. Ah yes, that’s it.