The Cantaloupe
One cantaloupe is ripe and lush,
Another’s green, another’s mush.
I’d buy a lot more cantaloupe
If I possessed a fluoroscope.
[or an MRI machine]

From Inside insides (Magnetic Resonance Imaging of Foods): behold, the cantaloupe revealed, as pried open by the magnetic fingers of a mighty MRI machine. 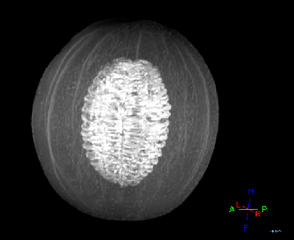 But even in this Age of Wonders, you still have to ask, will it taste good when you get it home?

Yow! Here’s an item that trips nearly all my triggers: robotics, biomimetics, aircraft design, 3-D printing, genetic algorithms… <SWOON> Throw in some cooperative swarming and alchemy and you’d pretty much have it all covered.

Here it is: Printing Insects. The idea here is to rapidly evolve flapping robot bugs with the assistance of 3-D printing. I first saw this in DIY Drones, which I’m enjoying more and more.

This work is coming out of Hod Lipson’s evolutionary robotics lab. Great stuff! Based on this video of a staggering starfish robot from Lipson’s lab in 2006, I wrote this a few years back.

William Gibson is often cited for this insight: “The future is already here. It’s just not very evenly distributed.” It’s a brilliant observation, and it leads to an interesting hypothesis: if we distribute the future more quickly, will it get here faster?

The answer is certainly yes. Here’s an example of what I mean.

Last September, two MIT students took $150 worth of parts, including a camera and a weather balloon, and built a rig that took pictures from 93,000 feet in the air. The story got a lot of press, and around the world many clever people said “Goodness gracious, how I desire to do that weather balloon thing too.”

So it was that I was surfing around the estimable SparkFun Electronics site and came across this item: High Altitude Balloon Launch. It’s the first in a seven part series that exhaustively instructs you on the art of building a high-altitude camera. At first I thought they were selling a do-it-yourself kit with all the parts included, but it hasn’t quite gotten that far yet. Nevertheless, this is a good example of the galloping frontiers that result when you distribute the future rapidly. Here we are, a short time after this novel innovation arises, and we’ve all got superb information and access to cheap tools that, in turn, encourage the growth of communities, guidelines, and norms. The weather balloon application caught my eye, but you see this pattern again and again.

There never was a better time to be a hobbyist. Indeed, the rise of the hobbyist has become a widely promoted theme. Here’s Chris Anderson talking about why Atoms Are the New Bits. Punchline: making is manufacturing.

The World Cup is now safely behind us, and life is returning to normal. For most Americans, the World Cup is a non-event, but more and more people here at least realize something important and globally disruptive is going on. You get some sense of this when you look at graphics about things like the insane texting volume that goes on during big games. Here is the US vs. England match. See if you can guess when the goals were scored.

There are plenty of genuine soccer fans here too, and you might be surprised to know that 19 US soccer players now play for leagues in other countries (a.k.a. “Hitting the Big Time”). I know this because of a great interactive graphic I came across on the Flowing Data blog. It depicts the relationship between where players are from (citizenship) and where they work (club team). The original graphic is from Brazil. Go there to try out the interactive aspects.

I wasn’t surprised to see that England has the most voracious appetite for foreign talent (117), but I was very surprised to see that, conversely, not a single Englishman plays for a non-English club. The same cannot be said of North Korea: three North Koreans plays for clubs other countries. Can that really be true? Brazil exports most of their fabulous talent to richer markets. Finally, in keeping with the notion of ever-increasing globalization, it really is impressive how much this intermingling of nationalities has increased since 1994. At that time, the majority of players worked in their country of origin.

Which reminds me: when I see players yelling at their opponents on the field, or arguing with the referee, I always wonder, what language are they speaking? Do they have any idea what the other guy is saying? But on reflection I recall that, as with most sports, it’s not hard to guess.

A few months ago I saw MIT finance professor Andrew Lo give a talk about the causes of the (what are we calling it now?) Great Recession. Professor Lo has a marvelously MIT-ish title: Director of the MIT Laboratory for Financial Engineering. I’m picturing Bunsen burners cooking murky brews of currency to test their liquidity. But I digress.

Lo is an entertaining speaker and did an excellent job explaining the mechanics of the collapse of the credit markets. But he then went on to discourage us from looking for scapegoats. He’s become fascinated by the nature of human behavior and what’s known as “normal accident theory”. The idea, first formulated by Charles Perrow in his eponymous book on the subject, is that when systems reach a certain level of tightly-coupled complexity (and especially when these systems are profitable, politically valuable, and generally successful), it can be impossible to prevent multiple small failures from cascading into disasters. Airplane accidents, nuclear reactor meltdowns, credit market disasters, oil rig fires, these all fit the model of normal accidents. They’re all protected by a vast web of safety measures that usually work very well.

Usually. In fact, the better your safety record, the easier it is to set up a really big disaster. Lo, explaining why normal accidents happen in the context of Wall Street, asked us to imagine telling the CEO of Lehman Brothers to shut down his most profitable department because the market is overheating. It’s quite simple: No one will stop a profitable locomotive, even when it’s clearly headed over a cliff. Nothing can stop the train. Nothing except crushing impact with the ground.

What’s the answer? As you might expect from an academic, Lo said: “More knowledge.” We need more PhDs, more smart people to help us understand these fast-moving financial innovations so they can be codified and regulated.

I can’t say I disagree with him; I like knowledge too. But I see an unsatisfying meta-loop, a lurking arms-race logic. More knowledge leads to more innovation, which leads to more poorly understood coupling. You always want to be faster than your problems. That’s the value of being smart. But as you race ahead, you plow up a bow wave of new problems that are just as fast as you.

Autocatalytic systems, which is to say self-interested systems that modify themselves, are the most fascinating and terrifying things in the universe. They usually work well, but you can never guarantee they won’t burst into flame tomorrow afternoon.

Don’t be alarmed. Things like this will happen from time to time.

The NS Savannah is one of the most glorious dead-ends in history. A nuclear cargo ship and the spawn of Dwight Eisenhower’s Atoms for Peace initiative, it appeared to be the harbinger of a brilliant future.

But it was expensive to operate and carried too little cargo for its size. Most important, it carried break bulk cargo that was loaded and unloaded the old-fashioned way: by cranes, hooks, and sweating stevedores. The Savannah was solving the wrong problem. We didn’t need a nuclear powered old-school steamer (Hey! Let’s take a crappy old thing and strap a nuclear reactor on it! Then it will be freakin’ awesome!). What we needed was a new system for managing freight.

As it happened, it was at this same time that Malcolm McLean truly was revolutionizing shipping with his intermodal shipping containers. The results were spectacular. It’s Malcolm McLean that made it possible for Chinese factories to extrude every single thing you touched in the last 24 hours. You can read the full story in this book, or you can do what I did and read this long book review. I won’t tell a soul that you didn’t actually read the whole book.

Containerization is such a powerful idea that it continues to ramify in every direction. Consider computing. From break bulk personal computers, we have started to migrate to the data centers that provide cloud services. Now Microsoft is breaking these data centers into shipping container units that can be moved and reconfigured in a jiffy.

I’m reminded of how subcellular containers are among the great advances that the eukaryotic cells in our body have over bacteria. The same is true of the virtual compartments afforded by internet-mediated communication. Fast-forming internet groups are social containers that permit chemistry to happen that would otherwise be too diluted by the masses. This will lead to vastly more complex forms of self-organization. It’s fun to watch.