Objet Geometries is an Israeli company with some nifty new 3D printers. They did a press release recently that got some play: 3D Printers Play Starring Role in New Animated Film Coraline. The story goes like this. Coraline is a stop-motion animated movie. That is, people are moving little puppets around a big model house and taking snapshots to make a movie one frame at a time. But making these little puppets is hard. So why not use 3D printing to create them? Here’s an example of how it works.

I love 3D printing, so my first thought was: how cool.

But there’s something very odd about this. They’re going from the computer model to a 3D printout to create a video frame that’s stored on a computer. That sounds to me like a very painful way to do computer-generated graphics. Something like carving your email on a tree trunk and flinging it at your friend. Or scratching a note on the back of your cell phone and gluing it to a postcard.

I know that photography of real scenery lit by honest-to-goodness light has a special richness that movie makers crave. And stop-motion animators are an obsessive bunch. But it’s so expensive and loopy compared to the computer graphics it resembles that I have to think this genre is a dying breed.

Carl Orff succeeded spectacularly where so many composers have failed. In the twentieth century he wrote a piece of music in a classical style, a secular cantata with Latin lyrics, in fact, that went on to be a modern pop cultural phenomenon. The Carmina Burana sounds ancient, but it was composed in 1937. The opening number, O Fortuna, is the one that everybody knows. It’s the one that they used for beer and Gatorade commercials. It’s the one they used in no fewer than ten movies, including Jackass and Cheaper By The Dozen.

I don’t mean to sound glib. I like O Fortuna as much as the next drinker of sugary beverages. I do. But what is it about the piece that inspires so much schlock? Maybe it’s because it delivers pretense, bombast, and orgasmic payoff in one incredibly compact package.

Anyway, from Steve Crandall’s blog I came across this helpful explanation of the puzzling lyrics of Orff’s chef d’oeuvre.

Fun stuff, and it puts me in mind of mangled and misheard lyrics of all kinds. Kiss This Guy is a site dedicated to misheard lyrics. The title comes from the well-known Jimi Hendrix riff from Purple Haze, “‘scuse me while I kiss this guy.”

This is either the story of a little man finding surprise in the famous old Parisian market, or the story of a giant egg man astride a battlement. The proof is left as an exercise for the reader.

Why of course you are. I have often admired your fine good looks. And as a reader of this blog, you possess a keen intelligence and a quick wit. Good for you!

Dolores Labs is a wonderful outfit that takes crowdsourcing very seriously. They have a core competence in driving Amazon’s Mechanical Turk to do some rather interesting research. Some of it is what you might expect: make the Turkers do dreary legwork, like determining the race of everybody who’s appeared on the cover of Sports Illustrated since 1954.

But the more interesting stuff they do is more like a giant psychology experiment on the Turkers themselves. Andy Baio did something like this recently, asking Turkers, Why do you turk?. It’s a humanizing answer to the question “who ARE these Mechanical Turk people anyway?”

Dolores Labs did the following. They said here are 100,000 photos of people you’ve never seen. Just tell us, are they attractive? Are they trustworthy? Are they intelligent? Averaged across millions of judgments, when do women experience peak attractiveness? The answer appears to be 24. Aha! I knew it! And anybody who buys car insurance for their son will not be surprised that a man’s trustworthiness trough is 18 or 19. And may we posit an inverse relationship between male intelligence and sexual distraction? What should we make of the W-shaped curve of perceived female intelligence? Is there a correlation between intelligence and trustworthiness? Read the article. It’s all there.

More from the Python Channel on YouTube. I came across this while fishing for free videos to download from the iTunes store. It’s a refreshingly straight un-ironic take on the influence of Monty Python on American comedy as seen by American comedians.

Jimmy Fallon has the best line: “If you play Dark Side of the Moon while you watch the Holy Grail, I guarantee that you are not getting laid.”

The Python Channel is now steadily adding content. Their experimental business strategy appears to be working very well. They’ve even got themed playlists now like the World Financial Meltdown Special. The Money Song is a surefire crowd pleaser, but I’ve always been fond of the Merchant Banker sketch: “I don’t want to seem stupid, but it looks to me like I’m a pound down on the whole deal.”

Social software, as exemplified by Facebook, claims to make us more social, but it often ends up encouraging some pretty antisocial behavior. We know by now that a successful platform breeds anonymous spam, but beyond that it’s amazing how weird otherwise normal people can act. There is, for instance, spam from people you know. As a columnist for The Onion once wisely put it, My Brother Is Going To Love This Forwarded List Of Lawyer Jokes

When you forward a mass-forwarded e-mail, you get a good feeling inside. As nice as it is to receive a 10-page list of mommy-mommy jokes, it’s even nicer to send that list along to dozens of other people you think would enjoy it, too. Like my brother Jim. Jim is just the sort of guy who appreciates funny stuff like that. To give you an idea of his crazy sense of humor, he once replied to a list of “25 Reasons I’m Late For Work” that I forwarded him. His reply read, “Stop sending me all this crap.” Isn’t that hilarious? That’s exactly why I know he’ll love these lawyer jokes!

Some social behavior on the web is so odd that it makes you wonder how it would play out in real life. On the LibraryThing blog I came across this video of what Facebook would be like without the computers.

That video reminded me of another one I saw from CollegeHumor.com. The premise for this one is: what would a business meeting be like if people behaved the way they do on web comment forums? Beware: this one does have some rude language. Internet Commenter Business Meeting.

On BotJunkie I found this: the 2009 Singapore Robot Games. Robot soccer is one of those things that sounds really cool, but turns out not to be very interesting. Most of the time, the robots are so clueless that the game is interesting only if you’re one of the people that built the robots.

Recently that’s started to change. Here’s a video from last month’s Robot Games in Singapore. It’s the first time I’ve watched robot soccer and felt like it was an exciting competition. That little pink striker is dynamite!

Also, don’t miss the six-legged robot race video on the same site. Huge bugs. When the contestants reach down to pick up their insectoid robots, I get the same sympathetic creepy feeling I get when the crazy guys on the Discovery Channel pick up giant scorpions. Yuck.

When you feel like a walking robot is icky wiggly creepy, that’s good news for robotics.

As noted in the NY Times, Google Earth recently added topographical seafloor data. So now, in addition to flying around Mount Everest, you can also swoop low across the Mid-Atlantic Ridge. It’s an important shift of view, because it gives you a visceral appreciation of the different forces that shape the underwater surface of the earth. 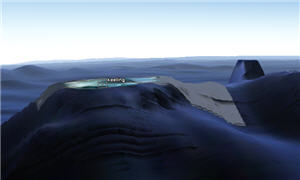 For instance, you can understand Darwin’s reasoning about the formation of atolls. In his day, there were various arguments about atolls being sea mountains caught in the act of rising or subsiding. But Darwin said, essentially, what are the odds that all these mountains, scattered across the whole Pacific and Indian oceans, all happen to be exactly the same height, which is to say, coincident with sea level? And why are they all associated with coral? There is indeed a mountain subsiding here, but it’s being augmented by a living crown. It was an impressive leap of reasoning… tiny polyps keep mountains growing in the ocean like gigantic plants.

It’s one of my favorite days of the year. If you listen carefully, you can hear the Sun starting to break the back of Winter. Where I live, it will be a while before the effects are visible, but make no mistake, the light is back and it means business.