There are many species of cave fish that, after millennia in utter darkness, have either lost their eyelids or lost their eyes entirely. You might think that losing your eyelids is a way station on a one-way trip to blindness. But the barreleye fish (for its tubular, or barrel-shaped, eyes) lost its eyelids even as its eyes were bulking up and becoming more powerful. Barreleyes live in the deep sea where there is still just enough light filtering down from the surface to silhouette a snack, provided you are looking straight up and have the necessary light-gathering equipment.

So, let’s say you are Mother Nature and you are presented with this puzzle: giant tubular light-collecting eyes and no eyelids. Hmmm… what to do? I know! Why not evolve a transparent head?

Look at this picture. 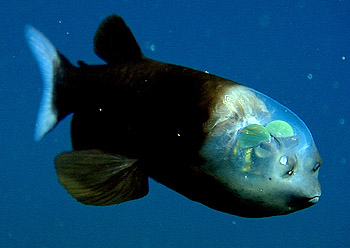 The things that look like eyes are actually nose-like things called nares. The head itself is clear, and the eyes are those giant green things lodged deep in the head jelly. In fact, the green things are the lenses on top of cylindrical eyes, and they point straight up, perpendicular to the body axis, like a twin telescopes in a sheltering observatory dome.

Now, look at the picture again and read the last paragraph again. It may help to mutter to yourself those are not eyes… those ARE eyes. It takes a while to sink in.

I don’t blame you if you don’t want to take my word for it. Read more about it here: MBARI News Release – Researchers solve mystery of deep-sea fish with tubular eyes and transparent head. That Mother Nature… where does she get her material?

Thanks to Greg Wilson for the tweet on this one.