Some months ago I was reading an article in American Scientist, and I thought it would be interesting to blog about it. If I had been reading the article online, it would have been a simple matter to tag it with my little WordPress bookmarklet that would insert it directly into my blog database. But I was at a Starbuck’s reading a magazine made out of paper. Without pen or paper, I was certainly doomed to forget about the article before I got around to blogging about it. Then I remembered my iPhone. Shouldn’t I be able to take a picture of the article and have it automatically find the article for me online? Shazam lets me find music this way, and SnapTell tracks down books. Lacking any such service, it occurred to me that I could at least take a picture of the page to remind me. Here’s the result. 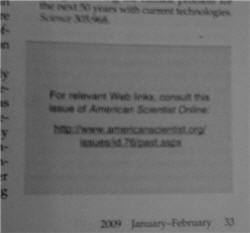 There’s a URL in that mess somewhere, but it took some real work to figure out after a few weeks had passed. Not so helpful. Sure enough, this article got lost in the shuffle.

Yesterday, sitting in a different Starbuck’s reading Technology Review, I found an article that I want to write about, and this time technology was on my side. The article in question had a QR Code embedded on it. This made it possible, with the help of a free NeoReader app, to jump directly from a low-res grainy photograph to a URL. Once I had the URL, I could open it in Safari and then bookmark it with Instapaper‘s Read Later feature. This transferred it from the phone to the cloud where I could retrieve it from my PC later that night. That’s still a lot of steps, but easier and more likely to succeed than a scrap of paper.

Ironically, neither method gets me past the last hurdle: a content paywall. I can’t blame a journal for wanting to make money off their content, but it’s too bad that I can’t point you to more of the article than this: Engineers restore high-resolution photos of the moon.

The reason I wanted to link to that article is a personal connection. NASA scientists are rescuing a bunch of mildewing lunar photography archives that were scheduled to be destroyed. In the meantime, they’re working out of an old McDonald’s at Moffett Naval Air Station in Mountain View, California. Here’s the defunct McDonald’s. Zoom out and look at the giant dirigible hangars. My connection is that I used to work at NASA Ames. I used to eat at that McDonald’s. But when I was there, there were no Lunar Orbiter tape reels blocking access to the fryolator.