Hey, look at this. This is my son. 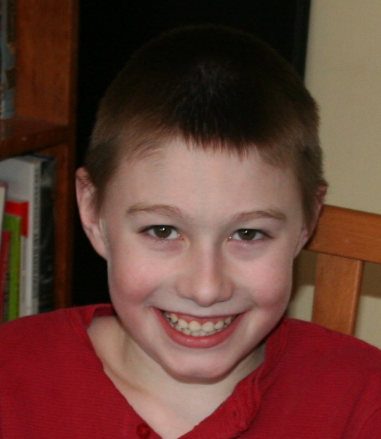 That’s a good looking boy, am I right? He is an active boy, restless and noisy. He wakes up much earlier than I like to wake up. He’s thirteen years old. His name is Jay. But he is most defined by the traits that swirl around in the wake of his autism. He can’t talk. He can’t dress himself. He doesn’t acknowledge the comings and goings of his mother, his father, or his sister. Or you for that matter. Sorry, but it’s true.

We’d like to be able to converse with Jay in a direct and natural way. That’s not possible now. But over the years a number of autistic individuals have learned to pierce the veil of their condition and tell us what life is like on their side. Listen as Jay’s mom Wendy describes some of these people in her annual fundraising letter. Because this Sunday is the day we walk with Jay and thousands of others around the Suffolk Downs race track in order to raise money for Autism Speaks. Please give!

A letter from Wendy:

As many of you know, Jay’s life and my life have changed dramatically since last year’s Walk Now for Autism. In late October, 2011, after searching for over a year, we placed Jay at a residential school for kids with autism. It was not a good fit for him, but the school had an opening and Jay’s high level of aggression at home made the move necessary. It was so sad to leave his day school after 6 years, an amazing place where the staff believed in his intelligence and found a way to teach him academics at or near grade-level. In late March, we were able to place him in our first-choice residential school, Melmark New England, located in Andover, MA. Jay, now 13 years old, lives in a big, new, beautiful home in the next town over from his new school, with 7 other students. The staff at the school and residence are well-trained, hard-working and caring, and Jay seems to be happy there. He is less aggressive than the last few years and following directions better.

We bring Jay home (or occasionally to travel with us) two or three weekends a month, and this summer he joined us for two weeklong vacations. I feel like I live two separate lives now. I miss Jay and feel guilty when he’s gone, though I do appreciate how calm and easy life is. When he’s home we are suddenly thrust back into our old lives of unpredictability, unease, and vigilance: a life on edge. But it is great to see his smiling face and it so much more bearable because it is for a short time. I continue to teach Jay academic lessons when he is home, trying to get him to spell out his answers by pointing on a letterboard. My mission in life remains for Jay to find a way to communicate his thoughts and to be able to converse with us.

I often wonder what Jay thinks of living away from home, and if he understands why we took this difficult step. If he could communicate, we could just ask him. But would we want to know his answer?

Sadly, the world is full of people like Jay, people with autism whose minds are trapped in bodies that don’t work for them. In recent years I have been inspired and enlightened by many nonverbal “low-functioning” people with autism who have found a way to communicate and have written the most astonishing things. Here are a few:

“I am more like you than not.”
“Autism is not so much an abnormal brain, but abnormal experience.”
(Larry Bissonnette)

“I was trapped inside like a caged animal waiting to be freed.”
(Tracy Thresher, on how he felt before he could type)

“How strong was this obsession? I felt like I was inside a plastic box, suffocated all day long, until I could take those metro bus rides. I could not imagine myself not riding the metro bus and train, even for a day.”
(Tito Mukhopadhyay, on his obsession for bus and train rides)

“Autism feels hard. It’s like being in a room with the stereo on full blast. It feels like my legs are on fire and over a million ants are climbing up my arms. It’s hard to be autistic because no one understands me. People just look at me and assume that I am dumb because I can’t talk or because I act differently than them.”
“It might not seem like I am at times, but I try very hard to act appropriately. It is so tough to do and people think it is easy because they don’t know what is going on in my body. They only know how easy it is for them. .. If I could stop it, I would. But it is not like turning a switch off. It does not work that way. I know what is right and wrong but it’s like I have a fight with my brain over it.”
(Carly Fleischmann)

People with autism want friends, they want to be accepted, they are intelligent and they have interesting opinions to share. But their disordered sensory systems and uncontrollable impulses make life so difficult for them and make others see them as cognitively impaired and antisocial. For those with challenging behaviors (and there are many), their parents have to choose between extreme self-sacrifice or not spending much time with them (if they are lucky enough to have help at home or a residential placement).

On September 30, Jay, Carolyn, Ned, and I will walk for a better world for those affected by autism. Autism Speaks does so much good: from funding scientific research into autism to helping achieve autism insurance reform to providing local community grants and resources to families. We know there are many deserving causes to support, but we hope you will consider supporting this one.

If you’d like to join our team, the “Jay Walkers”, at Suffolk Downs on September 30th, please email me as soon as possible. The Walk is a fun and inspiring event and we’d love to have you on our team.

If you’d like to donate, you can do so online at:
http://bit.ly/JayWalkers

or mail me a check payable to “Autism Speaks” and send it to:
11 Belknap Terrace, Watertown, MA 02472

Thank you so much for your support!