This is a review of the Pencil from Studio 53 designed for use with the Paper app. I sprang for the walnut version. It looks nice, and it feels nice. That’s the best thing I can say about it. 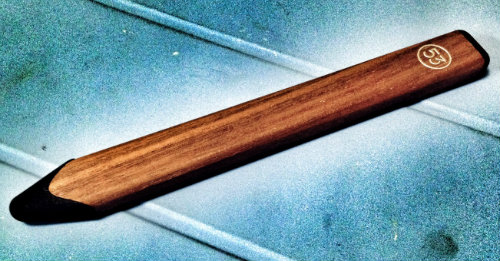 I’ll get straight to the punchline. You should not buy this cute little doggy of a product.

I’ve been thinking for some time that I want a stylus for my iPad, and I thought this was going to be the one that would make me happy. After all, it’s gotten loving reviews. But no.

First of all, it has a fussy interaction with Bluetooth. You have to connect it to the iPad via BlueTooth. When you do, the functionality of the pencil changes. Before the pencil has been connected, it’s just like using your finger on the screen. But once you mate the pencil to the app, the app understands the pencil has two ends, one end for drawing the other for erasing. Your finger can now be used as a third tool for smearing. In addition, the app is designed to give you palm rejection so that you can rest your hand on the screen and draw more naturally.

All this is great, so far as it goes, but the pencil-point tip switch doesn’t always work. This means that your palm is not always rejected. It also means that the so-called eraser is occasionally mistaken for a stylus, leaving you with marks where you wanted to erase. In addition, the pencil tip is sometimes mistaken for your finger, leaving an unwanted smear. It seems unforgivable to me that the business end of a pencil should occasionally forget what it is and leave a big smeary mess exactly where you were attempting delicate line work. It’s like a fire hose occasionally switching from water to gasoline. It’s frustrating, and it leaves you using Paper’s awkward two finger undo mechanism frequently.

The tip of the stylus is extremely fat, making it difficult for me to see where I’m going to be leaving a mark. The rubber top is a big floppy condom that keeps you from locating the true apex of the instrument. This makes it almost impossible for me to write text at any size smaller than headline. The fact that the Paper app doesn’t let me zoom in (in truth it has an awkward localized zoom feature that I dislike) means that I’m stuck with an extremely small page to write on.

Beyond this, I’ve been unimpressed with battery life. And although they gave me two stylus tips in case one of them wore out, I needed to replace the first tip almost right away. I dislike the fact that I have to push pretty hard to make the little switch activate so that I can draw.