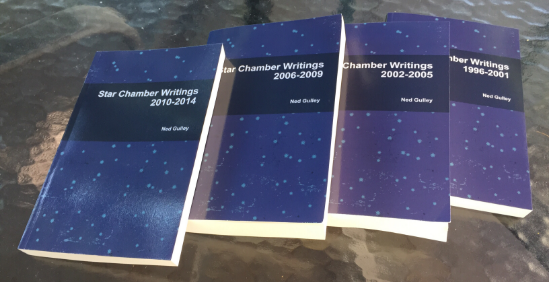 I began writing on this site in 1996 and I continued until early 2014, a span of something like 18 years. I took a long break from 2014 to 2016, and during that time I thought it would be fun to print out everything I wrote as a book. I found a good service, called BlogBooker, to take my blog text and turn it into a book form suitable for publishing with Lulu.

Then I went to Lulu and printed the whole thing in four separate books. More than a thousand pages, as it turned out. I don’t expect them to sell, but Lulu, as a standard thing, puts your book on sale. So hey, if you’re interested, you can look at them and buy them here!

It’s very satisfying to see all that thinking unrolled on paper. Think to Ink. Bit to It. Word to Flesh. It’s all there. Except for this. This part is not in the book. But it will be.